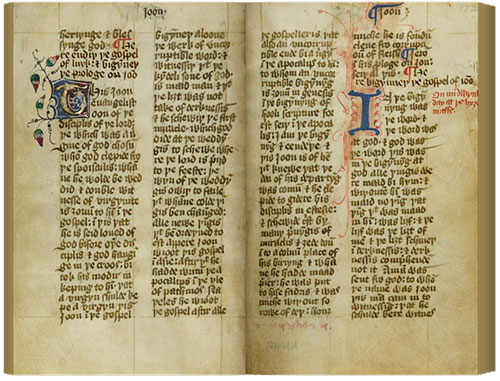 The presentation of this rare, hand-written manuscript is brought to you using high quality
digital reproduction with the utmost care for the preservation of the original piece.

This volume of the New Testament is the crowning achievement of England's most notable and prodigious scholar of the 14th century, John Wycliffe. The first complete Bible translated into English is referred to as the Early Version (EV) of Wycliffe's Bible translation. It was produced initially as a direct translation of the Latin Vulgate between 1380-82 by Wycliffe and his associate Nicholas Hereford. A revision to improve the readability of the text was begun almost immediately by Dr. Wycliffe and his secretary John Purvey, and the work was completed by Purvey after Wycliffe's death in 1384. Predating the invention of Johannes Gutenberg's printing press by more than half a century and therefore handwritten, this revision known as the Later Version (LV) was first published ca. 1388-89.

Among these exceedingly rare first editions is the volume featured on this site, made more extraordinary by a provenance that traces the ownership of this Bible through the hands of the famous English martyr, Richard Hun (or Hunne). Hun's murder at the hands of church authorities while a prisoner in the Lollards' Tower in London in 1514 and subsequent inquiries are recounted in extensive detail in Foxe's Book of Martyrs.

Both the Early Version and to a greater extent the Later Version were carried among the common people of England by a group of itinerate preachers established by Dr. Wycliffe, which he referred to as his Veri Evangelici (men of the gospel). This group, largely consisting of former students of Wycliffe at Oxford, traveled from town to town reading and preaching from their Wycliffe Bibles and New Testaments. The so-called Lollards were given that name (ostensibly from the Dutch lollaert for "mumbler") by the church authorities in that day who were opposed to Wycliffe. The Lollards were persecuted severely after Wycliffe's death; often they were imprisoned or even executed. Copies of Wycliffe's English Bible were confiscated and destroyed as well. The populace was largely illiterate at this time, but the spread of the Bible in English (and the church's efforts to prevent it) contributed to a rising desire for literacy and access to the Bible in their mother tongue.

Nearly a century and a half would pass before another English translation of the Bible would be published, this time by William Tyndale, who produced the first printed English version. Yet Wycliffe's version is often credited with planting the seed of yearning for reformation, which ultimately led to England's separation from the Roman church.